Park Güell is the most colourful place of Barcelona and you must visit it!

Originaly it was designed as a garden city in English style – hence the name – Park Guell, after all, became the most unusual public Barcelona park.

Park Guell was an attempt to create a residential complex in a natural setting in the old village of Gracia: an ambitious real estate development project commissioned by Gaudi's patron, Eusebi Guell. 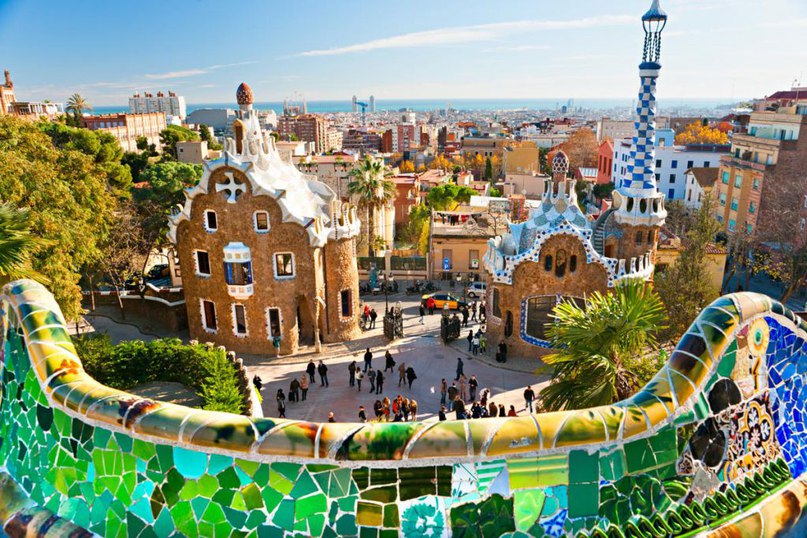 The architect chose an uneven terrain, a slope, with an area of 15 hectares, where 40 cottages were to be built. But only two were actually completed, and Gaudi lived in one of them. Now it is a Gaudi Museum dedicated to the life and work of the architect.

Gaudi prepared the "Park Guell" project between 1900 and 1914, demonstrating his concern with the urban planning of building paths, arcades and viaducts which were absolutely integrated into the natural environment of Barcelona. 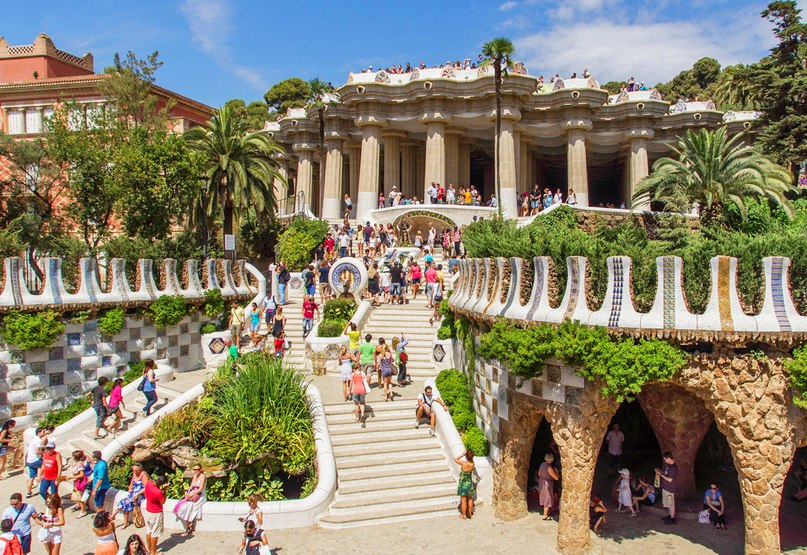 The guest houses, which were originally intended as caretaker houses, nowadays is the Guell Park Interpretation Center.

A stair flight, with its famous dragon covered with coloured ceramic tile particles, leads to the hypostyle hall. The impressive space includes 86 columns that serve as a base of the square above the hall (although the hall is called as "the hall of one hundred columns"). 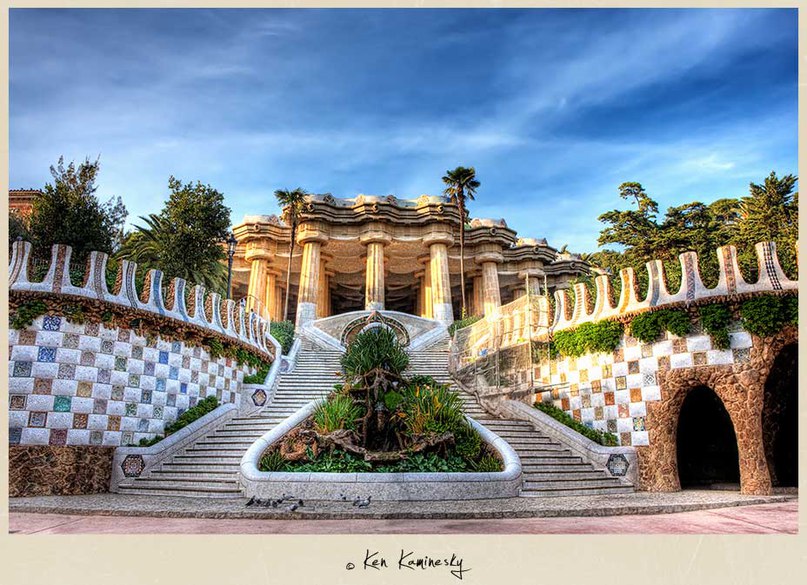 The winding bench around the perimeter of the square was designed by Jujol, one of Gaudi's associates in the construction of this unique Park in the old village of Gracia. Park Guel has been declared a UNESCO world heritage site. 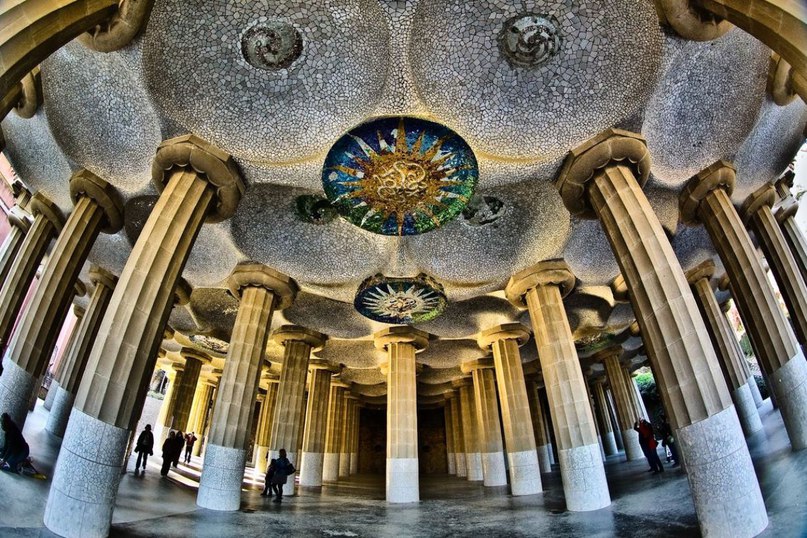 Park Guel is one of the main attractions of Barcelona, it is the project of the famous Antonio Gaudi. If the main masterpieces of this architect are located in the heart of the city, Park Guell is located at some distance from them. We will have to be patient, as the Park is quite far from the metro, the station is called Valkarka, it is a quiet residential area, You should better take a map with you, as there are not many signs in these places. 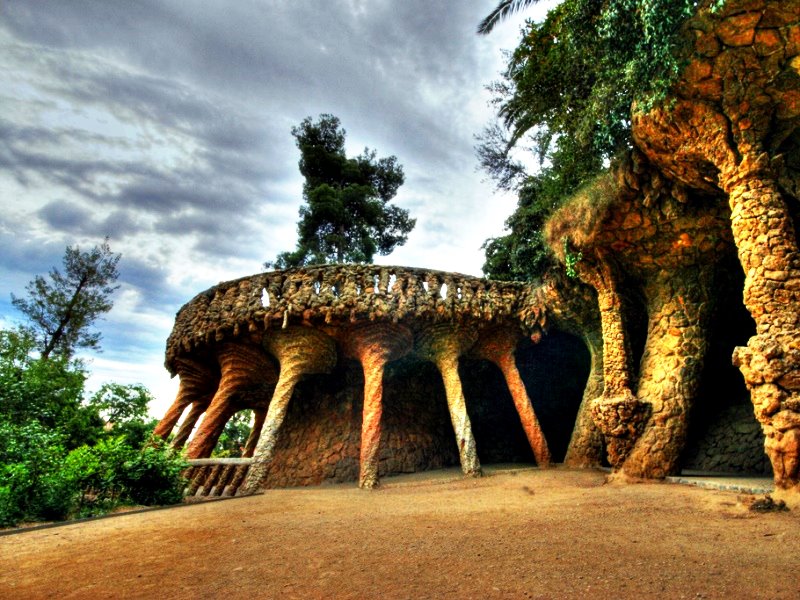 And Yes, you have to go up the hill, so forget about the heels, better put on something comfortable. Many tourists take tickets to the Park in advance, this, by the way, can be done on the Internet on the official website of the Park Guel. If you are going to visit Barcelona at the height of the season, it is better to buy tickets in advance, otherwise you will not get to the Park. This is due to the fact that the number of people who can be in the Park at the same time is limited. We were lucky, in March there are no crowds of tourists, so we just bought a ticket at the box office for 8 euros and slowly walked through the Park. The Park is famous primarily for its architectural compositions: a mosaic figure of a lizard, viaducts, the world's longest bench and cute gingerbread houses. 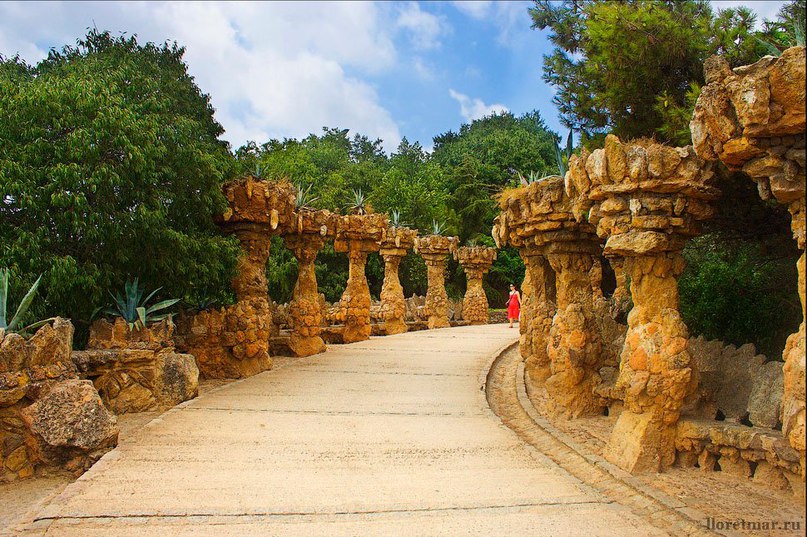 Park Guel is a perfect pattern of a harmonious combination of architecture and nature. There are a lot of fruit trees, flowers and shrubs in the Park. Since the Park is located on a hill, it offers stunning views of the beauty of Barcelona, you can even see the scaffolding of the Sagrada Familia. And in gingerbread houses there are souvenir shops where you can buy magnets, figures of the lizard, a calendar or souvenir dishes.